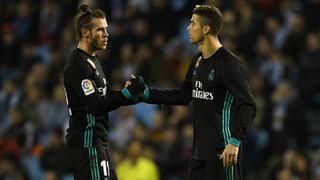 Cristiano Ronaldo, Gareth Bale and Karim Benzema have all been left out of Real Madrid's squad for the Copa del Rey quarter-final first leg against Leganes.

Benzema is yet to play in 2018 due to a hamstring problem and has not been risked for the meeting at Butarque.

Bale and Ronaldo have also been omitted, with the latter reportedly following a similar fitness plan to last season, when he was given rest periods in order to be as fresh as possible for the crucial games at the end of the season.

Captain Sergio Ramos, who has a calf injury, and full-back Marcelo have also not been included in the 19-man squad.

Zinedine Zidane's side face a hectic run of four matches over the next 10 days, including both legs of the Copa tie with Leganes and LaLiga matches against Deportivo La Coruna and Valencia.