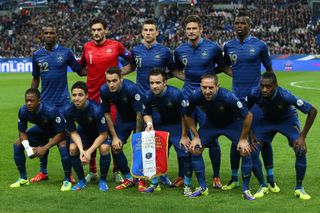 Reports had suggested the FFF were unhappy that they would not be seeded for the play-offs in November, meaning they could face the likes of Portugal or Croatia in the two-legged ties.

However, FIFA have revealed that while they were contacted by the federation, they were never asked to alter the seeding process.

The world governing body also confirmed that the rules relating to seedings cannot be changed once the competition has begun.

"FIFA has been contacted by the French Football Federation about the rules of the competition on the terms of appointment of seeded for the draw of European dams," a FIFA spokesperson said.

"However, no formal request was transmitted to us from the FFF.

"FIFA wishes to confirm that the settlement preliminary stages at the FIFA World Cup Brazil 2014 cannot be changed during the competition."

France qualified for the play-offs with a 3-0 victory over Finland on Tuesday and will be unseeded in Monday's draw.