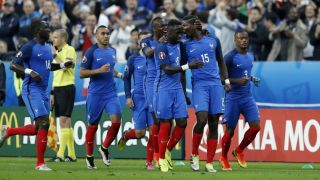 Joachim Low does not agree with suggestions France have a complex about facing Germany ahead of the Euro 2016 semi-finals.

The two nations have met four times at major tournaments, Germany triumphing on the last three occasions after France won the first clash 6-3 in 1958.

Low faced questions over a hoodoo his team supposedly faced going into their quarter-final against Italy, a team they had never beaten in eight matches at the World Cup and European Championship.

The Germany coach did not give credence to the subject ahead of the penalty shoot-out win over Antonio Conte's team in Bordeaux.

And he feels counterpart Didier Deschamps' will be similarly dismissive of claims Les Bleus are intimidated by their poor record against the world champions.

"I don't believe France have a Germany complex, we didn't have an Italy complex," said Low.

"I don't put much stock in such talk. What has happened in the past does not count."

France booked their place in the semi-finals with a 5-2 thumping of Iceland in Saint-Denis on Sunday, and Low was impressed by their display.

"France played an excellent game. The early goal helped them. They will have all kinds of confidence and are playing at home," he said.

"I said right from the start that with their home advantage they are one of the favourites for the title.

"We know what we have to do. I am looking forward to the match. It will be very even. I love knockout games like this."

The Germany coach deployed a three-man defence for the clash with Italy, but he is unsure if it will be the right approach against France.

"I am not sure [on our defensive line-up], I will have to think about it more," Low added. "Against Italy a three-man defence was the right solution.

"France are less predictable than Italy because players like [Antoine] Griezmann and [Paul] Pogba are always moving positions."

Mario Gomez has been ruled out of the remainder of the tournament, while the suspended Mats Hummels and injured midfielder Sami Khedira will miss the France match.

With Bastian Schweinsteiger also in doubt, Low acknowledged changes will be necessary as Germany try to secure a place in the final.

"There will be personnel changes, but I have faith in all of my players, even those who have not had much game time," said the coach.

"[Benedikt] Howedes did brilliantly against Italy. He is a useful player to me. He won almost all of his one-on-one battles.

"Emre Can can play in various positions. He is very strong physically and technically. Julian Weigl is also an excellent option.

"[Joshua] Kimmich is not an option in defensive midfield as he has only played right-back for us here. It is only an option if changes were needed in the game."