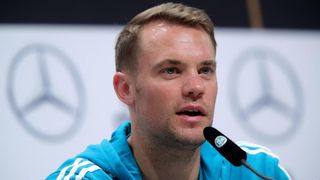 Manuel Neuer does not believe Germany need to change their starting line-up in response to their 1-0 defeat to Mexico on Sunday.

Hirving Lozano's first-half goal condemned Germany to their first opening defeat at a World Cup since 1982, raising the pressure on the defending champions ahead of clashes against Sweden and South Korea.

The last two world champions, Italy and Spain, have both exited the World Cup at the group stages in the defence of their crowns and defeat for Joachim Low's side against Sweden on Saturday could bring a premature end to their campaign in Russia.

However, Neuer is confident the squad will respond positively to the defeat against Mexico and, despite Germany's depth, feels that changes to the line-up are not necessary.

"I don't think we need to take out one or two of the players to bring in new ones," the captain told reporters on Tuesday.

"We're not thinking about changes in the squad or in the team but the quality is there throughout. For some of the players it's the first tournament but there are also very experienced players.

"Everyone is raring to go again, in Monday on training it was clear the players were fired up. They were battling and of course battling for places, everybody wants to be involved in the games.

"Everyone is desperate to play. We are not scared of giving our own opinion to each other within the squad as to who we think should play."

Germany, like the other nations at the World Cup, are also adjusting to the introduction of VAR and Neuer admits it has an impact on the squad.

"We have a new situation with VAR and those things need to be discussed too. You have to wait to see how the referee decides things and there will be a bit of a break after that," the 77-cap goalkeeper added.

"The decisions are difficult to make and you can't protest. Only the referee can decide if there's an offside or not, we have no say in it."

Germany fly to Sochi on Tuesday ahead of the clash against Sweden and Jonas Hector is available again after missing the Mexico defeat with the flu.