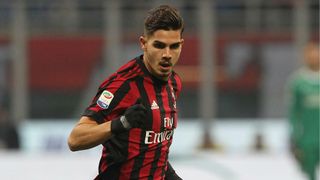 Silva earned a reported €38million move to Milan after impressing in his maiden full season in Porto's first team, scoring 21 goals in 43 appearances in all competitions.

But the 22-year-old has endured a dismal start to life in Italy. He is still waiting to get off the mark in Serie A, though he has hit the back of the net eight times in the Europa League.

Wolves, Swansea City and Arsenal have all been linked to the striker, but Gattuso is adamant he will not be going anywhere.

"Andre Silva is in good shape, he has this incredible desire to work hard. The biggest responsibility is mine, to be more courageous in throwing him into the mix," said the Milan boss at a media conference ahead of Sunday's match against Cagliari.

"He is young and needs to improve some things, but it's no coincidence so many clubs want him. Milan moved well to sign this player and want to keep him."

: "This is a beautiful job. The team has worked very well, we hope to show in the match what we have seen lately in training. I have really liked the team in this last period"January 20, 2018

He said: "Locatelli came to talk to me and the club a week before the mid-season break. He has to stay here.

"I played him from the start in the derby [against Inter in the Coppa Italia] because that was an important match. His time will come.

"He has to understand the 'mezzala' role a bit better. He can do it because of his physical and technical qualities. It's right that he remains here."

Gattuso's own future continues to be a subject of debate, but he was uninterested in responding to a Tuttosport report which alleged Milan were lining up Napoli boss Maurizio Sarri to take over next season.

"[My future] is not the priority. Time will tell but I just have to work calmly," he said. "I must do my all, try to win every game.

"The last problem Milan have to worry about is Rino Gattuso. I feel at home here and have great responsibility towards this club. Those aren't just words, I really mean it."