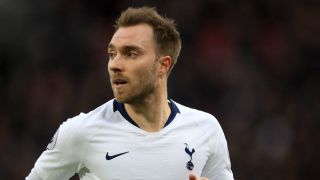 Mauricio Pochettino is not overly concerned about Christian Eriksen's contract situation at Tottenham and is convinced that "no news is good news".

Eriksen is enjoying another fine season with Spurs and played a starring role in Tuesday's 3-0 win over Cardiff City, scoring their second goal.

That took the Denmark international to four Premier League goals for the campaign, while he has also set up a further seven.

The 26-year-old's contract expires at the end of next season and talks are said to be dragging on, with speculation suggesting a deal is still some way off, but Pochettino is not worried.

"I think one of his strengths is his physical condition," Pochettino said. "Of course, he's doing a fantastic job for the team.

"I think we are so happy and so pleased. That is what you expect from a player when he signs, to step up and show their quality and in the way he's playing. It's very good news for Tottenham."

The win in Cardiff lifted Spurs back up to second ahead of Manchester City, at least until Thursday when the champions face leaders Liverpool.

That contest looks likely to have a major impact on where the title ends up in May, though Pochettino insists he is not bothered about the result.

"I don't care about the result, I just want to enjoy the spectacle and the game."