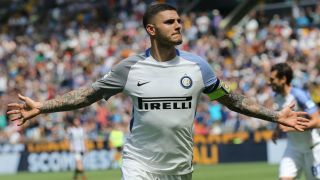 Inter have received no offers for captain Mauro Icardi and are keen to renew his contract, says chief executive Alessandro Antonello.

Icardi helped Inter qualify for the 2018-19 Champions League with 29 Serie A goals, a tally only matched by Ciro Immobile, but the star forward has been linked with a move away from Milan.

A possible switch to Serie A champions Juventus has been touted for the 25-year-old, who was left out of Jorge Sampaoli's Argentina squad for the World Cup in Russia.

But Antonello told Rai Gr Parlamento: "Icardi is the captain of Inter and there's a contract in place.

"There's a willingness on both sides to discuss a renewal, we'll meet in the next few weeks to go down that road and hope for the satisfaction of both parties.

"Offers? So far none have arrived."

Spalletti and Inter have been busy during the off-season, signing Radja Nainggolan, Stefan de Vrij, Matteo Politano and Kwadwo Asamoah.

"There's a contract in place and in the coming weeks we will also address the theme of the renewal of the contract of the coach," Antonello added.