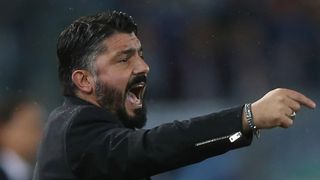 Gennaro Gattuso refused to rule out a move for Zlatan Ibrahimovic after seeing his side scrape a 1-1 draw at Lazio but said his focus is on improving his fifth-placed team's performances.

Milan were on course for a fourth victory in five Serie A matches after Franck Kessie scored in the 78th minute at the Stadio Olimpico to put the visitors ahead.

Gattuso's hopes were dashed when substitute Joaquin Correa equalised in the 94th minute to earn Lazio a point that their dominant attacking performance deserved against a Milan side missing numerous key players.

Andrea Conti and Gonzalo Higuain missed the match through suspension and Gattuso was asked whether reports that he might look bring LA Galaxy striker Ibrahimovic to San Siro are true.

"We'll see, but I think right now we need to concentrate on what we've got and what we need to do," he told Sky Sport Italia.

"There's no point thinking about it now. I just have to get my team playing as best we can."

The Milan coach picked out defender Francesco Acerbi as Lazio's best performer, while suggesting that his players sat back too much after taking the lead.

"It can happen that you are leading in stoppage time and go a bit deep," said Gattuso.

"The difference was made by Francesco Acerbi, who caused us problems with his physicality.

"Now we look forward and hope to recover some of the injured players. I don't expect positive news from them over the next few weeks, to be honest, so we'll give room to those who haven't had as much playing time yet.

"The team pulled out something extra during difficult moments and it was wonderful preparing for this game. There's no rush to get players back, because we want to avoid relapses.

"The club has been close to me during difficult moments. Any discussions we have are for the good of Milan."