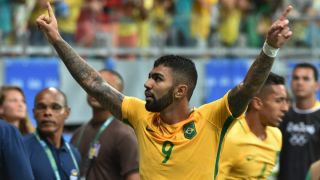 Despite being just 20 years old and having spent only four seasons in professional football, new Inter signing Gabriel Barbosa has been primed to succeed at the highest level.

So prolific was his time in Santos' fabled youth ranks, which has produced the likes of Pele, Clodoaldo, Diego and Robinho to name but a few, the striker earned the nickname 'Gabigol' – no pressure, then.

And as if such a moniker did not provide a big enough reminder of the expectations he was anticipated to live up to, Santos made clear they were pinning their future hopes on him in May 2013, aged just 16.

Gabriel was handed his debut in a 0-0 draw against Flamengo, a notable match as it provided a farewell for modern-day superstar Neymar, another of Santos' 'Meninos da Vila', but even before then his promise had been recognised across the Atlantic Ocean.

Neymar had inspired the club to a trio of Campeonato Paulista victories, the 2010 Copa do Brasil title and the 2011 Copa Libertadores, ending a 48-year wait for the return of the continental trophy, earning a move to Barcelona.

As part of that deal, the Catalan giants secured the first option on Gabriel, as well as academy team-mates Victor Andrade and Giva.

In sending Gabriel on that day in Brasilia, the club displayed who they were banking on being their next gem. He had big boots to fill. Barca had already shown an interest, and it perhaps weighed heavy on his teenage shoulders.

While Neymar's progression to the senior team had been explosive, Gabriel's was less emphatic, a fact reflected in their differing styles of play.

Neymar has always been capable of changing matches with moments of individual brilliance, dropping deep and making things happen. Gabriel, meanwhile, is more of penalty-box striker, who, despite being a clinical finisher, can also play from the wide areas - his movement off the ball frequently as devastating as Neymar's with it.

But Gabriel grew into his key role at the Vila Belmiro, helping the club to back-to-back Paulistaos and the final of the 2015 Copa do Brasil, in which he scored eight goals before they finished runners-up to Palmeiras.

His development was difficult to ignore and he earned a call-up to the national team from Dunga for the 2018 World Cup qualifier against Paraguay in March, replacing the suspended Neymar.

He did not make it onto the pitch, but Gabriel was back in the squad for the Copa America Centenario, marking his international debut with a goal in a 2-0 victory over Panama in a pre-tournament friendly.

Although that competition in the United States ended in disappointment, there was glory at the Olympic Games on home soil. Gabriel started all six matches as part of a formidable attacking trio alongside Neymar and new Manchester City buy Gabriel Jesus, scoring twice as Brazil won gold for the first time in their history.

The striker had already been attracting interest from the likes of Borussia Dortmund, Paris Saint-Germain, Juventus, Leicester City and Barca, but it was Inter who won the race for his signature. Seemingly unhappy with missing out, the Catalan side suggested legal action could be an option with their right to the first refusal not fulfilled by Santos.

Gabriel was greeted by swathes of fans upon his arrival in Milan and signed a five-year deal at San Siro on his 20th birthday.

Having been given an extended break following his recent exertions, Gabriel is with Inter's travelling squad and could make his debut away at Empoli on Wednesday. Failing that, his bow will come on Sunday at home to Bologna.

Inter fans have been thrilled by Brazilian strikers in Ronaldo and Adriano previously, and they will be hoping Gabriel can have a similar impact and play a role in their push for a return to the summit of the Italian game.

And with experience of the effect lofty expectations and intense pressure can have already under his belt, Gabriel is primed to shine in Serie A.