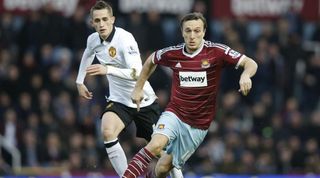 The 27-year-old midfielder's existing deal had been due to expire at the end of the season, but the club confirmed his renewal on Thursday.

"I'm obviously over the moon because it takes me until I'm 33!" said Noble. "I'm very happy with the contract and very grateful to the chairmen for giving me it and I'm looking forward to the next five years.

"In football you don't get any younger, but I keep myself fit and this is great for me and my family, because it gives us security for the rest of our lives.

"It's not about the money, though. I always give 100 per cent in every game I play, even if it's not enough. As a West Ham fan, I know we'll lose games like everyone does, but I'm settled, I'm happy and that's when I play my best football."

Noble joined West Ham as a 13-year-old in 2000 and surpassed 300 appearances in November last year.

The new contract will see Noble move to the Olympic Stadium with the club in 2016, and he added: "When we move to that stadium, it's going to be a massive plus for the whole club."