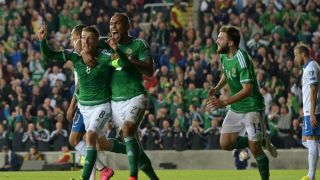 Northern Ireland made sure of their place at Euro 2016 with a 3-1 win over Greece at Windsor Park on Thursday to end a 30-year wait for a major tournament appearance.

The last time that Northern Ireland featured in a major tournament was at the 1986 World Cup and the current crop were set on their way by captain Steven Davis' opener.

Greece look set to end the campaign winless and fell further behind after the break as Josh Magennis - in for the suspended Kyle Lafferty - headed home a second to give the home side breathing space.

Christos Aravidis' late consolation did little to dampen the atmosphere, with O'Neill's men able to finish qualification on a high against Finland at the weekend as the country begins to dream of the Euros in France next year.

The hosts started well in Belfast, Oliver Norwood flashing a shot into the side-netting before Magennis saw an opportunity denied by Vangelis Moras.

Kilmarnock striker Magennis was picked to lead the line in Lafferty's absence, but O'Neill's men almost fell behind when Michael McGovern was called on to save Alexandros Tziolis' headed effort.

Magennis went close again when his goal-bound shot was deflected behind by Moras prior to the half-hour mark.

Northern Ireland got their breakthrough 10 minutes before the break when Davis benefited from a slick exchange between Corry Evans and Stuart Dallas.

Evans found the Leeds United midfielder with an incisive pass, with Davis sliding in to convert from close range, although the hosts were made to sweat before half-time as Kostas Mitroglou struck the post from distance.

However, Northern Irish hopes were bolstered further when Magennis angled a header home from a corner four minutes into the second half.

Magennis - who previously plied his trade as a goalkeeper earlier in his career - diverted Norwood's delivery over a Greek defender on the line to register his first senior international goal.

All the signs pointed to it being the home side's night and their third prior to the hour did little to suggest otherwise as Chris Brunt's delivery was fortuitously cleared straight to Davis.