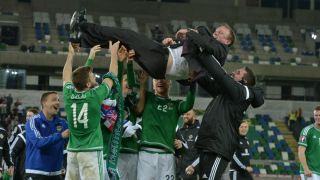 Michael O'Neill wants Northern Ireland to put on a show against Latvia in a friendly at Windsor Park on Friday as the hosts prepare for their first appearance at a major competition in 30 years.

O'Neill's men completed a dream qualification campaign by reaching the European Championship finals for the first time courtesy of topping Group F, one point ahead of Romania.

A 3-1 win over Greece last month ensured a first major tournament appearance since 1986 while victory over Finland soon after meant they topped the group. This week's opponents finished bottom of Group A, without a win from their 10 outings.

Chris Brunt will remain with West Brom for treatment on a groin/pelvis injury, although fit-again Jonny Evans returns to a squad that O'Neill hopes can maintain the buzz around football in the country ahead of the tournament in France next year.

"I'm looking for the team to enjoy the game at the national stadium, hopefully it will be a sell-out and fans can maybe congratulate the players a little bit," he told the Irish Football Association website.

"Everyone's looking forward to France but the players want to put on a performance and it's the start of our preparation."

O'Neill could tinker with his system but is unlikely to make too many personnel changes over the coming months, adding: "We don't have 50 players waiting to come in so it's not a case of there being huge options.

"We've had great consistency in the squad and the players have been fantastic. If I do bring changes to the squad, they have to earn that right and more importantly they have to fit in and be part of that squad.

"I don't envisage too many changes to the squad that got us to France and the one that we'll take to France."

Latvia begin a series of friendlies at Windsor Park as they look towards their first World Cup qualifier in September against Andorra.

Hamburg's Artjoms Rudnevs has been recalled by Marian Pahars and could feature for the first time in almost a year this week, with the striker eager to help Latvia build towards the World Cup qualification campaign.

"Of course, it is nice to receive that invitation again from Marians Pahars and to be here with the Latvian team," he told the Latvia Football Federation website.

"With Marians Pahars, we had a conversation and by mutual agreement we came to agree that I have to play and try to help the team.

"I am delighted to be back in the Latvian national team and I will try to give everything and help the team any way I can.

"Virtually all the games I watched on the internet and I have always supported the team members in the squad. Speaking today, it appears the competition among the attackers is much the same and Marians Pahars has signalled that we must be a team."