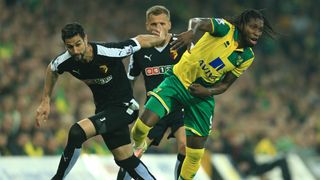 Dieumerci Mbokani scored twice as Norwich City beat Watford 4-2 on Wednesday but the result ultimately proved irrelevant as the Canaries suffered relegation to the Championship.

Supporters at Carrow Road were treated to a final home Premier League victory and an excellent display of attacking football, but Sunderland's win over Everton confirmed Norwich's demotion.

The home side fell behind after just 11 minutes when Troy Deeney scored his 10th Premier League goal of the season, but the outstanding Nathan Redmond levelled the match four minutes later.

Alex Neil's side plundered two further first-half strikes through Mbokani and an own goal by Craig Cathcart, but Watford hit back just after half-time when Deeney played Odion Ighalo in for his 15th of the league season.

Mbokani had the last word as he split Watford's defence with ease and made it 4-2, giving visiting manager Quique Sanchez Flores a reminder of his side's frailties at the back.

For Neil, seeing his side back among the goals after four consecutive defeats without scoring will have been no consolation, his team having fatally won just six home games across the course of the season.

Norwich made four changes to the side that lost 1-0 to Manchester United in their previous outing, including Graham Dorrans in place of knee injury victim Jonny Howson, while Watford drafted Allan Nyom in for Sebastian Prodl at right-back.

Watford took the lead when Deeney knocked a Miguel Britos cross down for Ighalo to shoot straight at John Ruddy, but when the goalkeeper failed to hold the shot Deeney pounced and fired into an empty net to give Watford the lead.

Having dominated the first quarter of an hour, Watford then failed to cope with some neat Norwich link-up play and Redmond played a one-two with Steven Naismith before beating Heurelho Gomes at the near post to level the match.

Full of confidence, Redmond then hammered onto the post with Gomes well beaten and Mbokani was on hand to stab home the rebound and revive Norwich's survival hopes.

The home side piled forward and the inspired Redmond hit the post shortly before Gomes saved brilliantly from Martin Olsson's long-range effort.

Norwich doubled their lead when Nyom slipped and allowed Wes Hoolahan to cross towards Mbokani, only for Cathcart to turn the ball into his own net as he attempted an interception.

The second half began in much the same way as the first, but this time Deeney turned provider as he beat Russell Martin and crossed for Ighalo to slam the ball into the net.

Watford's defence again let them down and Norwich's two-goal cushion was restored five minutes later when Mbokani played a simple one-two with Redmond on the edge of the box before chipping Gomes to make it 4-2.

News, though, of Sunderland's 3-0 victory over Everton confirmed the club's relegation back to the Championship just 12 months after they were promoted.