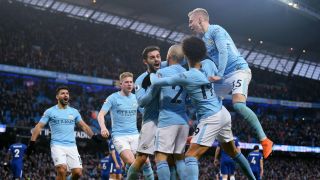 Manchester City must earn the right to be compared to Barcelona and other heavyweights of European football, insists manager Pep Guardiola.

The runaway Premier League leaders enter the second leg of their Champions League last-16 tie against Basel 4-0 to the good and arguably as the continent's form side.

A 3-0 victory over Arsenal at Wembley nine days ago secured the EFL Cup and, bolstered by a 16-point advantage over Manchester United at the summit of England's top flight, there is a sense of intrigue around whether this swashbuckling City side can launch an effective tilt at Europe's biggest prize.

Guardiola lifted the trophy once as a player at Barca and twice more as a manager, before leading Bayern Munich to three consecutive semi-finals without reward.

He maintains City's relative lack of pedigree at the elite level - their solitary Champions League semi-final appearance ended in a limp 1-0 aggregate loss to Real Madrid in 2016 - means the situation at the Etihad Stadium is different.

Asked whether his team were on the same level as Barcelona, the 47-year-old replied: "No, because it's completely different players.

"They are players who won in the past a lot; most of us are new here. Now we can say we won one title together but it's not good for us to compare with that team.

"That team dominated the last decade, 15, 20 years with different managers and players, winning a lot of things.

"To think about joining these kind of teams you have to be there for a long time. A long time means many, many years. [This season] we have just one title, that's all."

I never speak about the records. We are not going to play for the records, records can be a consequence of what we have done.Nunca hablo de récords. No jugamos para los récords. Los récords pueden ser una consecuencia de lo que hacemos.March 4, 2018

Guardiola feels the standout result from the first leg of last-16 matches serves to illustrate his point that stylish play and lavish investment are often no substitute for hard-bitten experience on the European stage.

"Sometimes it's not about how you play. The Champions League is completely different," he said.

"It's 3-1, because it's Madrid. Twelve Champions League titles is a lot.

"When they are talking about us as favourites to win the Champions League it is an honour. If we do not play good, people are not going to say that because we don't have legacy behind us."

English referees chief Mike Riley was at City's training ground for discussions with director of football Txiki Begiristain on Tuesday, following Guardiola's complaints that players should be more effectively protected from dangerous challenges.

The City boss warned some of his own players will need to curb rash tendencies that would jeopardise their Champions League hopes – citing Fabian Delph's dismissal in the shock 1-0 FA Cup loss at Wigan Athletic and Oleksandr Zinchenko's booking for scything into Victor Moses during the weekend win over Chelsea.

"When the action of Zinchenko in the first half, going down for the tackle on Moses, that's an orange – can be yellow, can be red. If it is red, you are out of the Champions League."

Raheem Sterling and Fernandinho returned to training on Monday following their recent injury absences but Guardiola suggested a more realistic return date for both men is the forthcoming Premier League trip to Stoke City.