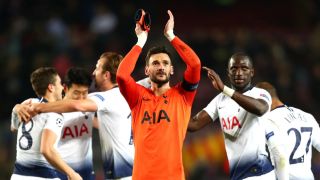 Tottenham great Glenn Hoddle enjoyed his former club's superb 1-1 draw at Barcelona – even if it was not ideal for his health.

Spurs snatched a place in the knockout rounds of the Champions League thanks to Lucas Moura's equaliser five minutes from time at Camp Nou.

It capped a remarkable turnaround for Mauricio Pochettino's side, who had a solitary point at the halfway stage in Group B.

He was released from hospital last month and chose his old club's moment of glory as the ideal opportunity to make his first public statement since.

"That just wasn't good for my recovery!" Hoddle tweeted.

"But a great performance well done boys, deserved to win."

That just wasn’t good for my recovery! But a great performance well done boys , deserved to win  COYSDecember 12, 2018

Spurs are back in action at home to Burnley in the Premier League on Saturday, when at least one observer will be hoping for a more sedate 90 minutes.