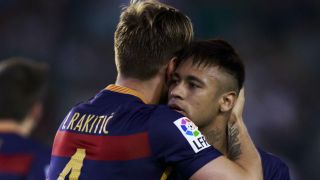 Ivan Rakitic is still ruing the "bad decision" Barcelona made in not preventing Neymar's world-record €222million move to Paris Saint-Germain.

Neymar's switch from Barca to PSG rocked the football world at the start of August, as he became the most expensive player in history.

Speculation had been rife for much of the pre-season of a possible move, though Barca were confident that Neymar was set to agree a new contract at Camp Nou.

But Barca were rendered somewhat helpless when PSG paid Neymar's buyout clause and Rakitic is still frustrated by the outcome.

He told the BBC World Service: "For me personally, it was really hard, not only because he's one of the biggest players. But also, for me, because he's a big person.

"He was really important for our dressing room, and for me he's one of the best guys I know in football.

"So for me it was really a bad decision because I liked to have him in my team."

Rakitic holds no ill-feeling towards the Brazilian, however, and wished him success in France.

The Croatian called for Barca to show unity following the departure of a key player.

"We have to respect Neymar's decision to move," Rakitic added.

"If a team can buy him and he decides to leave Barcelona, we have to respect it and wish him the best luck.

"Hopefully he can score a lot of goals and be happy in Paris, but we have to go on our way and be strong together without Neymar now."