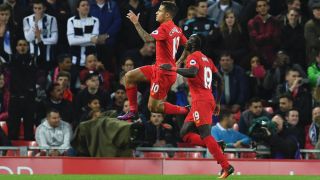 The Brazil international is set to make his return from an ankle injury when his side face Southampton in the first leg of their EFL Cup semi-final on Wednesday.

Coutinho's stellar form has seen him linked with a potential move to Barca, but Klopp said the 24-year-old would remain at Anfield.

"We never had any ideas or plans or any talks about him leaving, because he is our player," he told UK newspapers.

"There are no other ideas, nothing has changed."

Coutinho was enjoying an excellent campaign before his injury, contributing five goals and as many assists in 13 Premier League games.

Klopp said there was no chance of a club like Barca cooling their interest in Coutinho just because of a slight injury setback.

"It would be nice if big clubs thought like this and forgot about a player completely because he's been injured for five or six weeks," he said.

"Big clubs don't think this way, unfortunately. It was not a big injury so there was no question of him not being the same player afterwards."

After facing Southampton, Liverpool head to Old Trafford for a league clash against Manchester United on Sunday.