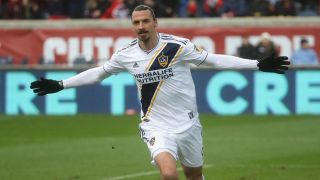 Galaxy star Zlatan Ibrahimovic welcomed LeBron James to Los Angeles, saying the city now had a king to go with a God.

James, 33, has agreed to a four-year, $154 million contract with the Lakers, it was announced on Sunday.

The three-time NBA champion joins the Lakers after two stints with the Cleveland Cavaliers and a successful spell with the Miami Heat.

James' move has been welcomed by several current and former NBA players and Ibrahimovic joined that group in characteristic fashion.

"Now LA has a God and a King!" he wrote on Twitter.

Ibrahimovic joined the Galaxy in March and has scored nine goals in 12 games for the MLS club.