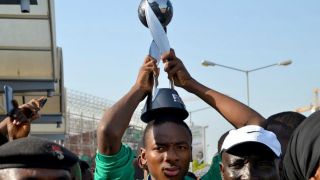 Young Arsenal midfielder Kelechi Nwakali has signed a season-long loan deal to join Eerste Divisie side MVV after being granted a work permit.

The 18-year-old, who was part of the Nigeria side that won the FIFA Under-17 World Cup in Chile in 2015, signed for Arsenal from the Diamond Football Academy in Nigeria earlier this year.

Nwakali, who won the Player of the Tournament award at the Under-17 World Cup, will have an Arsenal team-mate at MVV, as Stefan O'Connor is also on loan with the Dutch outfit.

Arsenal confirmed his exit on Friday and wished the player well for the campaign.