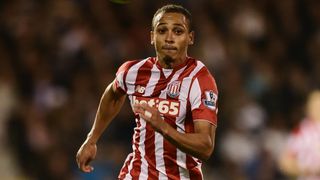 A 3-0 thrashing at the hands of Leicester City was not the ideal return to first-team football for Stoke City's Peter Odemwingie, but the Nigerian says he is fit and ready to go heading into the second half of the campaign.

The former West Brom striker has endured an injury hit campaign thus far, while his return to the first-team has been blocked by the performances of the likes of Bojan Krkic and Marko Arnautovic.

His substitute appearance against Leicester was his first minutes in the Premier League since October and while he understands that Mark Hughes is not short of attacking options, he has pledged to be ready for whenever he is needed.

"I'm happy to be back involved. Players are not happy when they're not playing, but I've been training at my best to be ready," he told the Stoke Sentinel.

"You need more games to be back to your best so hopefully I will keep being part of the team and get that game time.

"I hope I can play more. The boys have done great over the last month, but you know there are some times that fatigue kicks in and that's why we have a big squad.

"Hopefully it will get to my turn when the team needs me and I can contribute because I feel fresh."

While returning in such an emphatic loss made for a tough return to the first-team fray, Odemwingie said it was a fine example of why Leicester sits atop the table.

"It was a tough day. They were at their best. We saw why they are top of the table. We weren't as good as we have been for most of the last few months and that was the price we pay," the Nigerian said.

"They turn it on in the second half in many games. In the first half you might look at them and ask questions about why they are doing so well, but then we saw why. They are very fit, work hard for every ball and on top of that they have very good players.

"A combination of that explains all the victories they have been getting."

Odemwingie now hopes to help Stoke move into the League Cup final by overturning a 1-0 deficit against Liverpool in the second leg of their semi-final at Anfield.

"If we win on Tuesday then Leicester will be forgotten," Odemwingie said.

"The deficit is one goal. We lost at home but cup games are special. Anything can happen.

"We have done well away in many games so we can keep that at the back of our minds and hopefully the result will go our way."