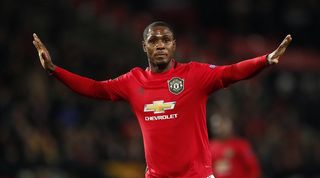 Odion Ighalo has described how it feels to represent Manchester United, the club he supported as a boy.

The Nigeria international moved to Manchester on a season-loan loan from Shanghai Shenhua in January.

Ighalo has impressed in his first few weeks at United, scoring four goals in eight appearances in all competitions.

The striker first played at Old Trafford in 2016 during his time at Watford, but he says he takes even more enjoyment from playing at the world-famous stadium now that he is representing United.

"When did I first set my eyes on it? It was in 2013 when I came to see the stadium, to visit it and go around, taking pictures outside the stadium," he told United's official website.

"The first time I played there was for Watford in 2016. Manchester United is a big club. When I saw that, I was amazed. I was outside the stadium and I took pictures.

"Then I played there with Watford, against United, and it made me even more happy. I came out of the stadium and stood looking at it.

“This is the stadium you have been watching back home when you were young and now you’re playing here for Watford against Man United. It feels good.

“And even now, playing for United? It’s making even greater moments for me.

“It’s good – you have to go to an event centre and pay to watch the games," he added on how United fans watch Premier League games in Nigeria.

"Any time United were playing, I’d go with my siblings. You’d have to pay to watch the games and now people are watching me and United. It is a big fan-base and it is growing even much bigger.

“Everybody is sending me messages saying they can’t wait to see me and watch the United games. I am very happy about that.”

What now for Saturdays at 3pm? Watch the France 98 World Cup Final with us