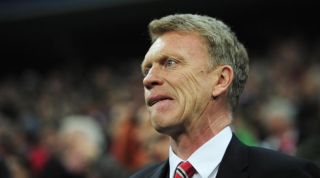 Moyes succeeded Sir Alex Ferguson as manager but was relieved of his duties on Tuesday, just 10 months into a six-year contract after guiding United to their worst season in the Premier League era.

O'Farrell's own tenure in charge at Old Trafford lasted only 18 months and had striking similarities to Moyes' reign.

The Irishman took over from one of United's most successful managers in 1971, Matt Busby, who - like Ferguson - hand picked his successor.

O'Farrell believes Moyes wasn't given enough time to impose himself on United, unlike Busby and Ferguson who also enjoyed difficult starts to their careers in Manchester.

"It took Alex Ferguson a while to become successful there and they were thinking of sacking him early on in his career," said the 86-year-old.

"And it takes that time to sort out the team, to assess your team, the players and find out what weaknesses you have and get a player to fill that position. I mean that takes you two or three years to do that."

As clubs push for the financial gain which comes from playing in the UEFA Champions League, there is added pressure on managers to ensure their team qualifies for Europe.

And O'Farrell believes United's failure to reach the Champions League for the first time in 19 years brought about Moyes' axing.

"The next manager to come in he'll have some short comings as well, there's no perfect manager."