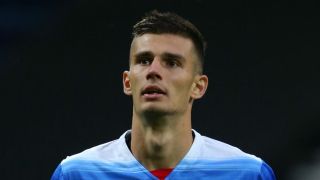 Chelsea has announced the signing of American defender Matt Miazga from the New York Red Bulls on a four-and-a-half-year contract.

The 20-year-old arrives at Stamford Bridge having made 38 appearances for the Red Bulls, with his debut coming at age 18.

Miazga helped the Red Bulls to two Supporters' Shields as they topped the regular season standings in 2013 and 2015.

The center back represents Chelsea's second new arrival in as many days, after Brazil international Alexandre Pato joined on loan from Corinthians until the end of the season.

Miazga told Chelsea's official website: "I am very happy to sign for Chelsea, a world-famous club with a reputation for major success. I am delighted to be in the Premier League, the best league in the world, and can't wait to meet my teammates and get going. I am still at the beginning of my career but I believe this is the place to develop and learn from some of the best players in the world."

Miazga's arrival follows the departure of Papy Djilobodji to Werder Bremen on loan, while doubt lingers over Gary Cahill's future at the club.

Having been faced with the decision of whether to represent Poland or the U.S. at the senior international level, Miazga made his debut for the U.S. against St. Vincent and the Grenadines in November.