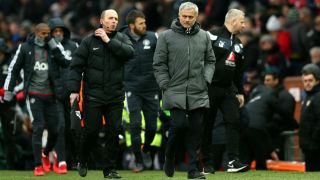 Jose Mourinho has risked incurring the wrath of Manchester United supporters after inferring that the atmosphere they create at "quiet" Old Trafford is inferior to that of Portsmouth's Fratton Park.

Manchester United secured a routine 2-0 win over Huddersfield Town at Old Trafford on Saturday, with Romelu Lukaku and Alexis Sanchez – who was making his home debut – getting the goals.

But Mourinho was not entirely happy at full-time, heading into his post-match news conference with a prickly outlook on the atmosphere at the 'Theatre of Dreams'.

Mourinho called the stadium "quiet" and suggested supporters were not "very, very enthusiastic", comparing Old Trafford to Portsmouth's 21,000-capacity Fratton Park in comments that are unlikely to go down particularly well among the United faithful.

FT: 2 Huddersfield 0.Second-half goals from and secure a deserved victory for the Reds. February 3, 2018

He told reporters: "Old Trafford is a quiet stadium. It is not Portsmouth.

"I remember Portsmouth when I came to the Premier League. It is such a small stadium, but it has an incredible atmosphere.

"Here the atmosphere is a bit quiet. It is not very, very enthusiastic, but the players like to play at home."