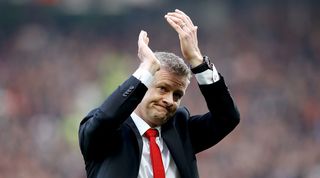 Manchester United will have to pay Molde £8m after appointing Ole Gunnar Solskjaer as their permanent manager.

Solskjaer was named as United's caretaker following the sacking of Jose Mourinho in December.

The former striker was in charge of Molde in his native Norway at the time, but the two clubs agreed a loan deal which would see Solskjaer manage United until the end of the season before returning to the Aker Stadion.

But the Red Devils announced on Thursday that they had appointed Solskjaer on a full-time basis, handing him a three-year contract and ending speculation about a potential approach for Tottenham boss Mauricio Pochettino.

According to the terms of the deal, United must now pay Molde £8m for the man who has guided them back into top-four contention and into the quarter-finals of the Champions League.

Solskjaer's side entertain Watford on Saturday as they attempt to climb above Arsenal and into fourth spot.

LIST 7 caretaker bosses who defied expectations and did the business