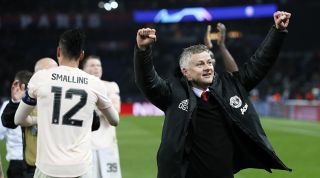 Roman Abramovich probably only hired well-liked former Chelsea player Di Matteo because he'd already paid severance packages to every big-name manager in Europe. The Italian stepped up from assistant manager in March 2012, after Andre Villas-Boas turned out to not quite be the new Jose Mourinho as many had hoped.

He started well, winning four games in a row, including a 4-1 Champions League victory over Napoli to turn around a seemingly lost tie. The season finished with a Double which would have seemed unthinkable when Di Matteo took charge: first, Chelsea won the FA Cup, beating Liverpool 2-1 in the final, before claiming their maiden Champions League crown by getting the better of Bayern Munich.

The wheels came off pretty quickly for Di Matteo, though, and Abramovich wielded the axe in November. Still, two trophies in eight months isn't a bad haul.

Dalglish proved wrong the old adage about never going back - for the most part, anyway. The Scot had been a legendary player and manager at Liverpool in the 1980s, before returning as boss following Roy Hodgson's sacking in January 2011.

He lost his first match against Blackpool, but results soon stablised and King Kenny was rewarded with a permanent contract at the end of the season. The following year, he led the Reds to the League Cup - their first trophy in six years - and the final of the FA Cup, where they lost to Chelsea.

An eight-place finish in the Premier League was the club's lowest since 1994, however, and it wasn't enough for the board to keep him on. The acquisition of Luis Suarez for £22.8m came on his watch, though, although it's best not to mention the £35m splurged on Andy Carroll. Nor Charlie Adam...

Barton’s remarkable spell at Aston Villa in 1982 was remarkable. The reigning First Division champions were making a mess of their title defence, which led to the departure of manager Ron Saunders when Villa fell to 15th in the table - just six points above the drop zone.

Chief scout Barton took temporary charge and made an instant impact, guiding the Villans to four consecutive triumphs and securing their place in the European Cup final in his fifth game in charge, a 0-0 draw with Anderlecht. Villa went on to avoid relegation and win the continent's premier prize with a 1-0 defeat of Bayern Munich.

An impressive run to the semi-finals of Euro 2008 with Russia put the experienced Hiddink in the frame to replace Luiz Felipe Scolari when the Brazilian was sacked as Chelsea boss in 2009. The Dutchman combined his national team duties with the Stamford Bridge gig, and immediately embarked on a winning run that included victories over Juventus and Liverpool. Hiddink even came close to taking Chelsea to the Champions League final, but they were knocked out on away goals after a controversial clash with Barcelona in west London.

His overall record was mightily impressive, though: Chelsea lost just one of 22 games under Hiddink's guidance, and ended the campaign with a victory over Everton in the FA Cup final. The Blues players even bought him a £20,000 watch engraved with a personal message as a leaving present - the sort of gift that Jose Mourinho presumably didn't receive in December 2015, when he was replaced by Hiddink for a second caretaker spell at the helm.

After his West Ham side set a record by being relegated from the Premier League with the highest ever points total in 2002/03 (42), Roeder was desperate to avoid a similar fate with Newcastle four seasons later. He'd stepped into the hot seat at St James' Park after Graeme Souness was sacked and, with Alan Shearer as his assistant, took the Magpies from the foot of the table to seventh spot.

That was enough to land him the job on a permanent basis, but Roeder was continually frustrated by injuries and supporters who were disillusioned with chairman Freddy Shepherd. Newcastle did become the first outright winners of the Intertoto Cup under him, though, and he left with his head held high in summer 2007.

In the late 1960s, the Brazilian FA, mirroring the creativity of their great players, favoured thinking outside the box. That’s why, when faced with a hot-headed journalist constantly criticising the team, they decided to make him national team manager: Joao Saldanha had been a particularly vocal member of a poisonous press and was allegedly given the job in the hope that it would shut him and his colleagues up.

At first it worked, as Brazil won all six of their qualifying games for the 1970 World Cup, scoring 23 goals and conceding just twice. But Saldanha’s off-pitch antics were a concern: he’d dropped Pele, claiming he was losing his sight, and chased his predecessor with a loaded gun after some press criticism - clearly not a fan of his own medicine, then.

The Brazilian FA opted for a safe choice when choosing his replacement, favouring Mario Zagallo - who'd won the World Cup as a player in 1958 - over other candidates. Zagallo made few changes to a winning team which featured all-time greats such as Garrincha and Carlos Alberto, instead simply reinstating Pele and letting nature run its course. Brazil won the World Cup in 1970, a triumph which many believe still represents the high point of international football history.

Maurizio Sarri, Carlo Ancelotti, Pep Guardiola. And Craig Shakespeare. What do they all have in common? All four won their first five Premier League matches as managers; the only bosses to do so (Ancelotti and Guardiola eventually made it six).

Leicester were in a post-title hole when Shakespeare – former assistant to Nigel Pearson and then Claudio Ranieri – took the reins in February 2017. A 2-0 defeat at Swansea had left them 17th after 25 matches and staring at the very real possible of relegation, all in the midst of a Champions League last-16 tussle with Sevilla. Ranieri had been sacked after a 2-1 loss at the Ramón Sánchez Pizjuan, but the writing had been on the wall before that.

Shakespeare's first game was a televised Monday night clash against Liverpool, which Leicester duly won 3-1 with a ferocious display of intent. They followed up with another against Hull, then stormed to a 2-0 home win against Sevilla which put them into the Champions League quarter-finals. West Ham, Stoke and Sunderland were all vanquished domestically, and Shakespeare got the job permanently that summer.

Four months later he'd been sacked after a questionable summer of transfer business had been backed up with a spot in the relegation zone by mid-November.

RANKED! The 10 best forwards in the world