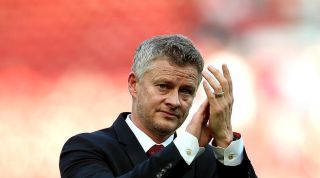 Ole Gunnar Solskjaer has called on his Manchester United team to score more "nasty little tap-ins" like he did during his playing days.

Solskjaer's side are without a win in three games following Saturday's 1-1 draw with Southampton.

The Red Devils had opportunities to retake the lead after Jannik Vestergaard's equaliser for Saints, but were unable to take them even after Kevin Danso's 73rd-minute red card.

And Solskjaer, who scored 126 goals during his 11 years as a United player, believes the club's current attackers must be more clinical inside the penalty area.

“We do create chances, we do create pressure,” Solskjaer said. “It’s about those scrappy goals now. We have young players and they’ve got to learn to score those nasty little tap-ins that I did. They count just as much.

“[Marcus Rashford and Anthony Martial] had so many years in this football club, in this team that I expect them to be leading stars. He [Rashford] will get it. He’s getting there. We keep on practising those finishes and crosses.

“If we can build the pressure as we did, I’m sure we’ll do OK. He wants to have the full array of armoury. He wants to play on the left, through the middle, as a No.10, as a right-winger. He knows, both for England and for us, he’s got great team-mates. Harry Kane is the No.9 for England and Anthony for us, so he knows he’ll sometimes have to play off the left.”

After taking five points from their opening four matches, United sit eighth in the Premier League table heading into the first international break of the season.