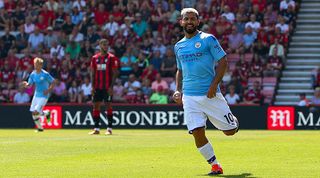 A new Premier League record for the most goals in a single season was set on the final day of last term, when Crystal Palace’s 5-3 victory over Bournemouth and two more five-goal games took the total to 1,072 – six more than in 2011/12. That record could easily be broken again this year.

After three rounds we’ve only had 82 goals, seven fewer than the 89 at this stage last campaign, and at the current rate that means 2019/20 is predicted to give us 1,039 by the end of May.

But it’s still early days. And here’s why a new record could be set...

In 2018/19, only eight players scored 15 or more Premier League goals. Only four of these were traditional centre-forwards too, reflecting the lack of potency among many of the division’s mid-table clubs. To address this, several clubs signed big-money strikers – and many of them have already started scoring.

Elsewhere, Tammy Abraham’s double at Norwich suggests he is an upgrade on five-goal Gonzalo Higuain (Chelsea’s top-scoring striker last season), Moise Kean is a coup for Everton… and then there’s Teemu Pukki.

In theory, the Premier League’s ‘high bar’ for intervention is a good thing: the on-field referee ought to hold the power, and to keep a high tempo only ‘clear and obvious’ errors should be overturned.

The problem with video technology is that once it’s introduced, there’s no going back. The urge to forensically analyse every decision will only grow stronger, and as pressure builds (thanks to obsessive TV analysis and whinging managers), the ‘high bar’ will be subconsciously lowered.

At the moment, referees appear to be playing it safe – awarding fewer penalties because of the VAR safety net – while the VAR is being overly protective of the on-field ref’s decision. Both are passing the buck to the other. That will change with time, but the balance eventually struck is bound to favour the more technically accurate of the two refereeing methods.

Sheffield United, Villa and Norwich are all keen to play on the front foot. All three deploy a long and wide formation, and all three pick extremely attacking line-ups that prioritise fluid possession football over defensive sturdiness. It’s no surprise that their nine matches have produced 29 goals so far.

Norwich’s positional interchanges between their three playmakers (Todd Cantwell, Marco Stiepermann and Emiliano Buendia) are pleasing on the eye, but it means an under-stocked midfield leaves alarming amounts of space in front of the defence.

Sheffield United’s approach seems more stable for now, but could come unstuck when they face better opponents. Villa don’t use a defensive midfielder at all, which along with Dean Smith’s marauding full-backs, makes them extremely vulnerable.

4. Cautious managers out of fashion

The sort of cautious organisation that defines Steve Bruce’s Newcastle and Roy Hodgson’s Crystal Palace is now thoroughly unfashionable. The era of fire-fighter managers appears to be over, largely because clubs have finally realised that a defensive approach leads to gradual, unstoppable decline.

Graham Potter’s appointment at Brighton perfectly captures the current mood, following Ralph Hasenhuttl’s initial success at Southampton after the Austrian replaced Mark Hughes. The result has been goals at both ends in 2019/20.

Hiring aesthetic tacticians means a greater attacking threat, of course, but it also means a much higher risk of things going wrong.

Two of the league’s least experienced coaches are in two of the most difficult jobs in English football. That half of the Premier League’s Big Six clubs are defensively chaotic marks a considerable shift from last year’s record-breaking campaign. In 2018/19, Chelsea and Manchester United conceded a combined 95 goals. They’re currently on course to leak 127.

Ole Gunnar Solskjaer has shown little concern for tactical cohesion at the back since his appointment in December, and his obsession with mimicking the attacking speed of Sir Alex Ferguson’s 1990s United leaves Scott McTominay all alone to patrol midfield.

Frank Lampard wants to play high-pressing possession football, but without the diligent tactical compression preached by the likes of Pep Guardiola, this leaves Chelsea maddeningly open.

Finally, Manchester City are even better than they were last season because Kevin De Bruyne is back to his peak – the Belgian has already amassed four league assists. Continuing at their current rate, City would score 127 this year; 32 more than in 2018/19.

They will probably slow down a bit, but not that much; Raheem Sterling and Sergio Aguero both look sharper with De Bruyne pinging ludicrous passes into the box.

QUIZ! Can you name the 50 clubs with the most Champions League appearances since 2000?