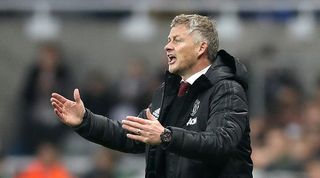 Manchester United manager Ole Gunnar Solskjaer says he will not shy away from giving opportunities to young players despite the team’s struggles this season.

The Red Devils are just two points above the relegation zone heading into Sunday’s meeting with Norwich at Carrow Road.

Defeat by the Canaries and victory for Liverpool over Tottenham could see United fall 18 points adrift of top spot.

Solskjaer has come under pressure in recent weeks but he has earned praise for his use of young players since taking charge last December.

And the ex-Cardiff boss insists he will not change his policy despite acknowledging that United are going through a “difficult transition” period.

The 20-time English champions are currently enduring their worst start to a league campaign in 33 years, having taking only 10 points from a possible 27 so far in 2019/20.

"You have to be brave. You have to trust your players and trust the kids," Solskjaer told Sky Sports.

"We need results as soon as possible. We need a result against Norwich. But then again we are in the situation we are.

"We made the decision to start the transition and that transition period has been difficult but I think the young kids are going to learn from it. You want to win, you want to win trophies and win in a certain style. But you also want to do it with young kids.

"That is the DNA we have. We do give young players a chance and you will not really know about them until you throw them into deep water and see if they can swim. Those boys so far have done really well.”

United could climb into the top half of the Premier League table with victory over Norwich on Sunday but could slip to 16th if results go against them.