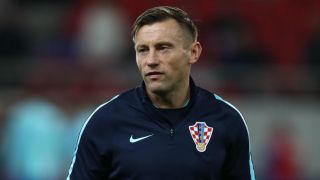 Croatia assistant coach Ivica Olic thought it was a joke when he was told that Germany had been eliminated from the World Cup.

Joachim Low's side sensationally crashed out on Wednesday following a 2-0 loss to South Korea after picking up just three points from their opening two games.

The World Cup holders were among the favourites to win the title in Russia, and Olic - who spent 12 years of his playing career in Germany - admits he was scarcely able to comprehend their exit.

"After the late 2-1 win against Sweden, everyone in Croatia said 'typical Germany'," he told Bild.

"I did not see the game against South Korea because I was on the training ground with my team.

"Then I got the info. I thought that was a joke. I could not and did not want to believe it.

"But from the beginning, the Germans have not had their game under control."

In stark contrast to Germany's woes, Croatia have lit up the World Cup with Luka Modric, in particular, making headlines for his dominant displays in midfield.

They face Denmark in the last 16 on Sunday and Olic says it is their fight and passion that is propelling them through Russia 2018.

"I think we Croatians have good genes," he added.

"And we are all big fighters. But we work hard too, damn hard. In addition, sport is simply our passion."