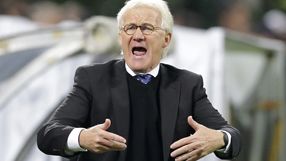 "I have been in football for 40 years but I've never experienced anything like this. He let his team-mates down," Olsen told reporters after the 3-1 defeat to Italy in Milan on Tuesday.

The FC Nordsjaelland defender was named as a substitute after Olsen picked Simon Poulsen ahead of him. When Poulsen was injured in the warm-up, Mtigila refused to play, Olsen said.

"I asked Patrick Mtigila to warm up but he was so disappointed by our decision [to start Poulsen] that he said he couldn't play an international match. I immediately asked him to leave the dressing room and he has played his last international."

Ten-man Italy beat the Danes with goals from Riccardo Montolivo, Daniele De Rossi and Mario Balotelli. The Italians top qualifying Group B on 10 points from four matches, with Denmark on two points after three games.