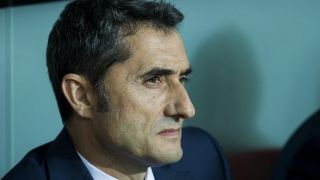 Former Olympiacos manager Ernesto Valverde endured a frustrating return to Greece as Barcelona's 100 per cent record in this season's Champions League came to an end with a 0-0 draw on Tuesday.

Having won the Greek Superleague three times, completing the domestic double twice, across two spells in charge of the home team, Valverde was warmly welcomed back to the Karaiskakis Stadium.

However, after beating another of his ex-clubs in Athletic Bilbao on Saturday, the Barca boss was denied a second successive win over old employers as the La Liga leaders surprisingly drew a blank in Greece.

Lionel Messi and Luis Suarez both failed to take excellent chances as the Catalan club - who lost Sergi Roberto to a right hamstring strain - failed to score for the first time since a 2-0 defeat against Real Madrid in the second leg of the Spanish Super Cup on August 16.

Still, the result extends their unbeaten run in all competitions to 15 games, while they remain firm favourites to win Group H after Juventus and Sporting CP battled out a 1-1 draw in Lisbon.

Sergi Roberto has a right hamstring strain. On Wednesday he will have more tests to find out the exact extent of the injury October 31, 2017

Handed an award by the hosts to mark his achievements prior to kick-off, Valverde nearly witnessed his side gift Olympiacos an opening goal when Samuel Umtiti and Marc-Andre ter Stegen were involved in a mix-up inside their own penalty area during the first 45 minutes.

Umtiti had made no mistake earlier with a sliding tackle to deny Omar Elabdellaoui a shooting opportunity, the defender timing a risky, make-or-break challenge from behind to perfection.

However, the majority of the opening half saw Barcelona pressing for a breakthrough.

A combination of wasteful finishing and goalkeeper Silvio Proto's reflexes stopped the La Liga side from scoring before the  break. On the one occasion they did put the ball in the net, Denis Suarez's effort was correctly ruled out for offside.

Proto denied Messi on three occasions but was not even called into action when Luis Suarez squandered an excellent one-on-one opportunity in the 22nd minute, the Uruguayan toe-poking wide after Denis Suarez's pass had sent him clear.

Sergi Roberto was forced off in first-half injury time - Gerard Deulofeu replacing his injured team-mate - but neither the enforced change, one that led to a reshuffle as Denis Suarez shifted across to the left, nor the interval disrupted their dominance.

Just as Luis Suarez had fluffed his lines earlier, the usually ruthless Messi let Olympiacos off the hook when unable to steer the Uruguayan's cut-back pass on target from close range, albeit he was off balance when making contact with the ball.

Former Barcelona youth product Alberto Botia produced a crucial block to turn away a left-footed shot from Luis Suarez, who also saw a delicate lob clear the advancing Proto but only land on the top of the bar.

Ter Stegen was a spectator for almost the entirety of the second period, only required to turn away Konstantinos Fortounis' curling free-kick aimed for the back post.

Proto needed to make one final save from Messi in stoppage time to preserve his clean sheet and secure Olympiacos' first point in the group stage this season.

A draw is hardly a Greek tragedy for Valverde, yet he will no doubt feel this was a win that slipped through his side's hands.