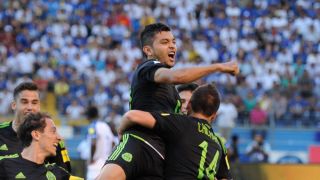 This summer, Mexico will head to Brazil with a talented team of players who weren't 23 years old before Jan. 1 and three players who are older than the rest. There, El Tri will attempt to defend the title they won at the last Olympics, when an Oribe Peralta double led Mexico to a 2-1 win over Brazil in the gold medal match.

Mexico again boosts an ultra-talented group of young players, with the jewel among them Jesus "Tecatito" Corona. Corona has shined so bright that he was one of the senior team's biggest gems in 2015. The 23-year-old was Mexico's best player in Chile at the Copa America, came on as an attacking spark in the Gold Cup and CONCACAF Cup, and helped Mexico to victories in the opening two matches of World Cup qualification, scoring in the win against Honduras.

And look no further than the goal he scored for Porto this weekend if you want to see if his club performances are measuring up to the heights he's achieving while representing his country. It's been a fast rise from Monterrey to Twente to Porto, but he's been able to adapt to every level.

This summer, in addition to Mexico's gold medal defense, the senior national team will be up against South America and CONCACAF's best at the Copa America Centenario. Federation officials have said that no player — not even Corona, who did a Copa America-Gold Cup double in 2015 — will play in the Olympics and the Copa America. Corona was afforded that opportunity in 2015 because cash-strapped Twente was eager to put Corona in as many shop windows as possible. That won't be the case with Porto.

Now Mexico has a decision to make. Will Corona be at the bequest of Juan Carlos Osorio, the senior national team manager, or would Mexico be better served by sending the attacking star to help Raul "Potro" Gutierrez's side in Brazil?

It seems that Corona might be bound for the Olympics. For one, the player said he has aspirations to play in the Summer Games. "Of course I'd like to go. It would be like a dream, another goal achieved," Corona told  ClaroSports  of the Olympics.

For another thing, winning the gold medal might be Mexico's biggest priority this season. A Copa America success would be great, but it certainly won't be easy with so many South American teams coming into 2016 in good moments.

"We're not required to get [the Copa America] because we're not playing alone," national teams sporting director Santiago Banos said Monday . "Brazil, Argentina, Chile, Uruguay, Colombia are going. We're going to be facing national teams that are powerful on the international level."

That's not even mentioning red-hot Ecuador and CONCACAF rivals like the United States and Costa Rica. Mexico can take great pride in its success at the youth level, and another strong showing at the Olympics would solidify Mexico's legacy as a youth powerhouse.

Osorio understands that, saying Monday that he will work with Gutierrez to make sure both teams are well equipped.

"I feel like part of Mexican soccer, and I'm at Potro's service," Osorio said at a news conference. "We'll chat to determine who's going to go with him."

Mexican soccer is probably best served sending age-eligible Corona to the Olympics, but finding the right mix of expendable talent and experience for the three overage spots will be more of a challenge.

Rafael Marquez, who is no longer a part of Mexico's best center back grouping but showed in Atlas' opener that he still has surprising ability for his age and is a treasure trove of experience, seems like a good fit. Can he keep up with the world's youngest stars?

Peralta might be another attractive option for Brazil after his heroics last time around. At this point, he's probably surplus at the senior level. Mexico's U-23 side is stacked at goalkeeper, with Gibran Lajud and Jesse Gonzalez more than capable of filling the role. There are plenty of defenders, and the midfielders are world class. Up top, Carlos Fierro and Erick "Cubo" Torres should work well together, but Peralta could provide a change of pace from the rising stars.

These are questions Mexico fans will debate over the next few months, and Osorio and Gutierrez will pour over when they get together. Are there "right answers"? It's tough to say.

Mexico has plenty of talent to spread between the two teams, but if the Olympic squad doesn't win a gold medal or the Copa team falls short of expectations, there will be criticism. Expect the two managers and federation officials to be very cautious about who they put in each tournament, but also expect a fun summer seeing how the teams come together.