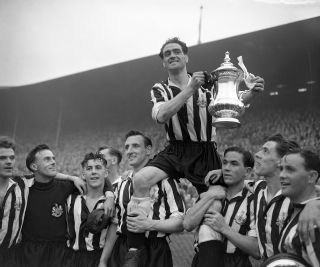 Newcastle retained the FA Cup when they beat Arsenal 1-0 on this day in 1952.

Here, the PA news agency looks at the Magpies’ victory at Wembley.

The road to Wembley

Holders Newcastle set out to defend the Cup and beat Aston Villa 4-2 in the third round. A 3-0 win at Tottenham and 1-0 victory at Swansea followed before a 4-2 triumph at Portsmouth in the quarter-finals. The Magpies then beat Blackburn 2-1 in a semi-final replay after initially drawing 0-0. Arsenal’s road to Wembley started with a 5-0 win at Norwich while they also overcame Barnsley, Leyton Orient, Luton and beat Chelsea 3-0 in their semi-final replay.

Arsenal were forced to play over 50 minutes with 10 men after Walley Barnes was forced off injured – substitutes for injured players were not brought in for another six years. Cliff Holton, Don Roper and Ray Daniel also suffered problems and the Gunners only had seven fit players on the pitch at the end. Chile international George Robledo grabbed the winner with just six minutes left in front of 100,000 fans as the Magpies cashed in on their numerical advantage.

Newcastle went on to win the FA Cup again in 1955 – beating Manchester City 3-1 – but it remains their last major honour. They have not reached the Cup final since 1999, when they lost to Manchester United, having also been beaten at Wembley by Arsenal the year before. Arsenal have won a record 13 FA Cups but after defeat in 1952 they had to wait until 1971 to win the trophy for a fourth time.