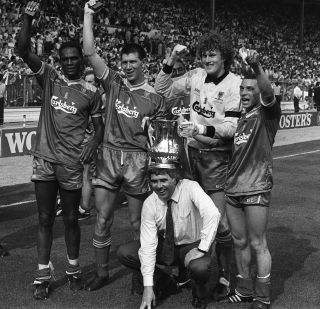 On this day in 1988 Wimbledon completed one of the greatest FA Cup shocks when they beat Liverpool 1-0 at Wembley.

Wimbledon had just completed their second season in the First Division and had only been in the Football League for 11 years.

They beat West Brom, Mansfield, Newcastle, Watford and Luton to reach the final.

Liverpool had just wrapped up their 17th league title while Wimbledon had finished a very respectable seventh, although 33 points behind the Reds.

They had been playing in the Southern Football League in the 1970s and were 17-1 to win the trophy.

Lawrie Sanchez gave Wimbledon the lead in the 37th minute when he glanced in Dennis Wise’s free kick.

Liverpool had a goal disallowed when Peter Beardsley’s effort was ruled out before they were awarded a penalty after an hour when Clive Goodyear fouled John Aldridge.

Dave Beasant became the first goalkeeper to save a penalty in the FA Cup final when he palmed away Aldridge’s effort.

Wimbledon moved to Milton Keynes in 2002 – eventually changing names to MK Dons – with AFC Wimbledon founded that summer and rising through the leagues until they reached the Football League in 2011.

They have both been battling relegation from Sky Bet League One this season.