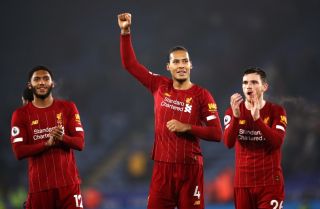 Liverpool look to be on course for a record-breaking season, having dropped just two points so far and amassed a huge lead at the top of the table.

While much of the praise they receive inevitably focuses on the attacking ability of their front three, they have been defensively solid throughout the season, conceding just 15 goals in the Premier League.

Even more impressively, they’ve only let in one in their last 11 games, starting with a 3-0 win away at Bournemouth on 7 December.

They have complemented each other superbly, conceding just once over the last two months. Wolves’ Raul Jimenez was the only player to find a breakthrough but he still ended up on the losing side thanks to Roberto Firmino’s late winner.

Joe Gomez has been unlucky with injuries during his Liverpool career, restricting him to 61 league appearances since he joined from Charlton Athletic in the summer of 2015.

When he’s been able to play the 22-year-old has typically impressed with his physicality and defensive nous. He has won eight caps for England.

Virgil van Dijk is the senior figure in Liverpool’s defence and his arrival in January 2018 helped to transform Liverpool’s prospects.

The Netherlands international was central to the club’s Champions League success last season and finished as runner-up to Lionel Messi in the Ballon d’Or standings.

Since Gomez and van Dijk were paired together against Watford, in Nigel Pearson’s first game in charge of the club, their form has been immaculate.

Nine clean sheets have been kept out of a possible ten and there was little they could do to prevent Jimenez’s header from an Adama Traore cross.

The Invincibles II? A look at the longest unbeaten run at the start of every Premier League season