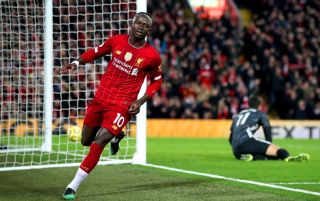 This wasn’t Sadio Mane’s most consequential goal, but it was as easy on the eye as any.

Three days after Liverpool were held to a 0-0 draw at Old Trafford, Klopp's side headed down to Watford in need of a strong showing to keep their title bid on track. They went one-up inside the first twenty minutes when Mane found space in the area. His first touch took him away from goal, but he wasn't fazed, producing an ingenious backheel chip over Ben Foster.

Liverpool went on to win 5-0 but drew the Merseyside derby three days later, a result which ultimately proved fatal to their title bid.

Mane's first goal in professional football came for Metz, just before they were relegated to the French third tier.

That, and his subsequent performances in the 2012 Olympic Games, alerted Gerard Houllier, who was working for Red Bull at the time, to the 20-year-old Senegalese starlet. A £3 million transfer to Red Bull Salzburg would save Mane from wasting away in the French lower leagues.

Here, Mane scored a crucial third as Liverpool confirmed a power shift in the Premier League.

Just over five minutes into the second half, Jordan Henderson’s searching cross found Mane at the back post. His header was fumbled in by Claudio Bravo, giving Liverpool an unassailable three-goal lead.

It opened up a nine-point lead over the Champions, who had ruthlessly denied them the title the season before.

Salzburg and Mane had been flying in the first half of the 2013/14 season. In preparation for the second half of the campaign, a sold-out Red Bull Arena played host to a mid-season friendly against Pep Guardiola’s Bayern Munich.

Mane stole the show, scoring the first, winning the penalty for the second and setting up the third. A failed transfer bid from Jurgen Klopp’s Borussia Dortmund soon followed.

Ex-Salzburg defender Ramalho told FourFourTwo: “What Mane did in that game was outstanding. I felt sorry for the Bayern defenders - he was unstoppable.”

One which could have been much higher on this list had the latter stages of the 2018 Champions League final gone a little differently. Briefly recovering from the loss of Mohamed Salah and Loris Karius’s first howler of the night, Mane grabbed an equaliser after latching onto Dejan Lovren’s header from a corner.

Real Madrid, as we know, went on to win comfortably, but Mane marked himself as a bright spark on a dismal night in Ukraine.

After Liverpool spent £34 million on him - then a record fee for an African player - Mane made an instant impact with a debut goal in a 4-3 win away to Arsenal.

It remains one of his best - picking the ball up on the right-wing, beating Nacho Monreal and Calum Chambers before firing across goal into the top corner. A sign of things to come.

Liverpool were heading for their first defeat of the season with five minutes to go at Villa Park, before Mane, one of the league’s most in-form players at the time, hit a wonderful cross for Andy Robertson to equalise on the 87th minute.

Mane then headed in a dramatic winner in the 94th minute, further demonstrating Liverpool’s knack of grabbing results at the death.

After an inconsistent first season with the Saints, Mane properly announced himself with the fastest hat-trick in Premier League history.

Mane’s three goals were scored in just 2 minutes and 56 seconds, handing Southampton a three goal lead inside the opening 16 minutes. They went onto win 6-1, giving themselves a shot at a top-six finish with one game to go.

A match that initiated the recent rivalry between City and Liverpool - Mane’s stunner resigned Guardiola’s side to their first defeat of the season. It was one of Mane’s best: a rising shot finding the top corner.

You could make a case that the result both denied City an invincible season (who knows if they’d have lost the Manchester derby with an unbeaten record on the line?) and gave Liverpool a psychological edge in their Champions League quarter-final later that season.

After a goalless draw at Anfield, Bayern Munich were rightfully favourites to knock Liverpool out of last season’s Champions League Round of 16.

But a sublime Mane goal broke the deadlock and gave Liverpool a crucial away goal. He plucked a hopeful long ball out of the sky, before bamboozling the on-rushing Manuel Neuer and chipping into an empty net.

It was the moment that kick-started Liverpool’s run to Champions League glory.

FEATURE 20 years of Jose Mourinho: The brilliant and bizarre moments of his career so far

QUIZ Can you name every club Mesut Ozil has ever assisted against?