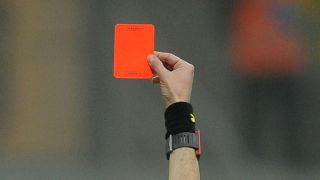 Liga MX duo Pablo Aguilar and Enrique Triverio have had respective bans for confrontations with match officials extended to one year, bringing an end to a strike by the Association of Mexican Referees (AMA).

Club America and Paraguay international defender Aguilar was initially suspended for 10 matches having made contact with the referee after a Copa MX defeat to Tijuana last week, while Triverio got an eight-game ban for a similar offence during Toluca's meeting with Morelia.

The AMA deemed the punishments insufficient and reacted by refusing to offer their services for matchday 10 of the Liga MX Clausura last weekend, which was consequently postponed.

However, following an appeal, Aguilar and Triverio have been handed one-year suspensions by the Federation of Mexican Football (FMF).

"Upon analysing the documents and supporting evidence, the Appeals Committee decided to revoke the sanctions put in place by the Disciplinary Committee on March 10, 2017, with respect to the players Enrique Triverio of Club Toluca and Pablo Aguilar of Club America," an FMF statement read.

"Instead, it has determined to sanction the players... with a year of suspension and a fine of 450 UMAS for having violated Article 18 subsection n) of the Regulations of Sanctions."

Following the extended sanctions, this week's Copa MX matches will go ahead as planned, with the Liga MX returning at the weekend.

An AMA statement read: "Starting from this moment we are reporting for work on the pitch, giving our all for successful competitions."