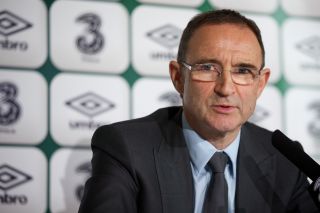 The former Aston Villa and Sunderland manager was chosen as the successor to former incumbent Giovanni Trapattoni last week, with the Italian paying the price for failing to secure a spot at the FIFA World Cup.

O'Neill is in the unusual position of taking charge of a squad he did not choose.

But he is confident the players are ready to move on from a disappointing fourth place finish in Group C, and urged his charges to stake a claim for a spot in the starting XI.

"I don't think we can actually look at it as a friendly game," he said. "There's a lot of competition, players are playing for positions.

"They're ready, they're enthusiastic. There's disappointment at how the qualification campaign ended. They feel the killer blow came in the loss to Austria. That seemed to knock confidence a bit, from there it was uphill.

"We have some very decent players which I knew about already. They're the players you want to go and see make things happen for us. I think this game against Latvia is an opportunity to do so."

O'Neill has also had managerial spells at Leicester City and Celtic, and he admits it will be strange not dealing with the day-to-day aspect of football management, and also stated his intention to forge a good relationship with club managers.

"It's a different scenario (international management)," he continued. "This morning didn't feel that different in the sense you have a group of players who you work with.

"But when you sit down and consider it, absolutely it is different. I'll have time to consider certain things over the new year, it's remarkable we don't have another game until March. I think that's when it will hit me.

"I still have empathy and sympathy with club managers who want their players back, so I have that in mind.

"Over time I have to strike up a rapport with those club managers, you want to be on reasonable terms with them and show them we will treat them okay when they come to us."

Ireland host Latvia at the Aviva Stadium on Friday, before an away fixture with Poland in Poznan four days later.