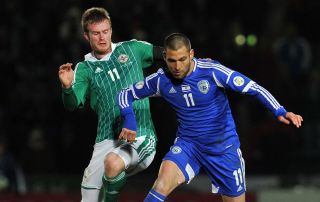 The duo were missing from training ahead of the final FIFA World Cup qualifier in UEFA Group F, but both should be available for selection.

O'Neill will already be without centre-back Jonny Evans who was shown a straight red card in the closing stages of the 2-0 defeat away to Azerbaijan.

And with Gareth McAuley and Oliver Norwood also missing through suspension, O'Neill will not want to see his squad stretched further.

"Brunty (Brunt) and Martin won't be training today (Sunday)," O'Neill said ahead of the dead rubber with Israel.

"But it is just precautionary and we expect both to be fine for the game.

"The lads who played can do very little work two days after a game anyway - it's more of a recovery session for them but the lads who didn't play can do a little more.

"The majority of work for the match will be done the day before the game."