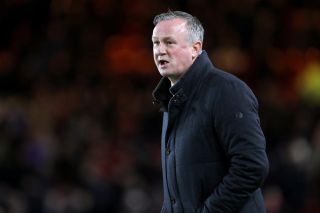 Stoke boss Michael O’Neill hopes 2020 can be a fresh start for the club after they posted a superb 5-2 win at Huddersfield.

It was the first time the Potters have hit five goals in a game since 2015 as they moved out of the Championship relegation places.

City had led 1-0 before trailing 2-1, only to come from behind themselves as they moved up to 21st in the table.

Tyrese Campbell’s brace added to goals from Sam Vokes, Nick Powell and Lee Gregory – with Town’s strikes coming from Steve Mounie and a Danny Batth own goal – to seal a first Stoke win in Huddersfield since 1992.

O’Neill said: “The reaction of the players was fantastic – I don’t think that anyone can dispute we deserved to win.

“It’s been a difficult year for this club. I think there was only nine wins in the last calendar year so it’s testament to the players’ mentality [this result].

“Today was a fresh start for us and the players took it. It would have been easier for us to not have a reaction but the reaction was fantastic to going 2-1 down.

“The intensity and quality of our play was great and game by game we’re building confidence.”

O’Neill also had his say on the tannoy announcement that took place in the second half.

The message to spectators was regarding offensive behaviour following chants aimed at Stoke’s James McClean.

McClean, who has been vociferous about sectarian abuse he has received, applauded when the announcement was made.

O’Neill added: “People have to be held accountable for their behaviour when they come to a stadium.

“It’s not something we want to be consistently talking about – sectarianism or racism or whatever.

“We want to be talking about the game because there was seven goals here.”

Stoke bossed the first half but only had a slender 1-0 lead to show for their efforts.

The excellent Vokes had scored the opener after 15 minutes after Danny Simpson fluffed his lines to allow Powell in and he duly teed up the striker.

Town were well below par in the first half but two goals in the space of three minutes just after the restart saw them go 2-1 up.

First, Mounie (48) thumped home a header from a corner to level proceedings before Batth scored an own goal after goalkeeper Jack Butland inadvertently punched the ball onto him from another corner.

Stoke could have wilted but instead they turned on the style.

Powell (57) slid home an equaliser before the visitors went back in front as Campbell produced a classy lob in the 66th minute.

Campbell (70) then notched his second with a fine finish before substitute Gregory added gloss with the fifth in the 90th minute.

Dejected Huddersfield boss Danny Cowley said: “I thought it was a car-crash of a performance to be honest.

“We looked well short of it, physically and mentally. We got bullied by a strong Stoke team.

“Despite that, we managed to get 2-1 ahead – but we still managed to lose it. Sam Vokes led the line brilliantly for them, and we couldn’t cope with him.

“It’s been a tough Christmas for the players we’ve had available but we capitulated. That’s hard to take, particularly at home.”

On the tannoy announcement, Cowley added: “There’s no place for discrimination of any type whatsoever.

“I’m sure the club will investigate this and make sure the people involved in it are duly punished.”