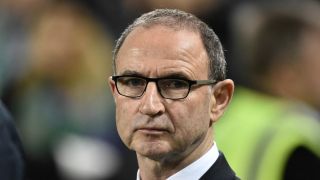 Martin O'Neill has indicated he plans to stay in football after stepping down as Republic of Ireland's manager following their Nations League relegation.

O'Neill led Ireland to the last 16 at Euro 2016 but they failed to qualify for the 2018 World Cup and dropped out of League B after a 0-0 stalemate away to Denmark on Monday.

The 66-year-old previously enjoyed successful spells with Aston Villa and Leicester City in the Premier League and took charge of Ireland in November 2013 after he was sacked by Sunderland earlier that year.

And O'Neill suggested he will seek another job after ending his five years with Ireland by mutual consent on Wednesday.

"I have had the great honour of managing the Republic of Ireland national football team for the past five years and it is with a heavy heart that I leave this role," O'Neill said in a statement.

"It was one of my lifetime ambitions to take charge of the Irish senior squad and I would like to thank the Football Association of Ireland board for giving me that opportunity.

"I will not forget the night in Lille when we beat Italy to secure the nation’s best ever achievement in the Euros competition, the terrific night we beat the world champions Germany at home in Dublin, or James McClean's goal in that euphoric win against Wales in Cardiff that put us through to the play-offs for this year's World Cup."

1 - The Republic of Ireland scored just one goal in the 2018 UEFA Nations League; only San Marino (0) scored fewer, while the Irish also attempted fewer shots than every other team (22). Departure. November 21, 2018

The former Celtic boss continued: "Knowing that the past year would be a transitional phase for the squad, I have capped 12 new players in the last nine games, with the aim that they become significant international contributors in the coming campaign.

"To the players, I reserve great praise and admiration for the phenomenal commitment they have shown whilst wearing the Irish shirt. Having had these great experiences in my spell as the Irish international manager, I am looking forward to my next adventure in football."

Ireland international Jonathan Walters expressed surprise at O'Neill's departure ahead of the Euro 2020 qualifying campaign, with the draw made next month.

"I didn't expect Martin to leave as manager," the forward wrote on Instagram. "Although we've had a very difficult year in terms of results, I'll balance that with the amount of players that have just started their international career.

"I would've been very confident in qualifying under Martin and still am with the group of players we have. On a personal note I have the utmost respect for Martin as he is and always has been fantastic for me."