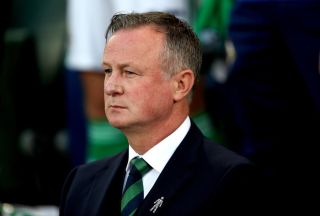 Michael O’Neill was proud of the way his players hung on as Northern Ireland survived a late fightback to beat the Czech Republic 3-2 in Prague and secure a first friendly away win in 13 years.

The Green and White Army achieved what England could not on Friday as a brace from Paddy McNair, either side of Jonny Evans’ strike, gave them a victory which eased the pain of Thursday’s late defeat to Holland in a Euro 2020 qualifier.

But it did not come easily as Vladimir Darida and Alex Kral scored two in two minutes midway through the second half to set up a nervy finish.

Though he would rather his side did not concede, it was perhaps the perfect scenario for O’Neill: securing a morale-boosting win but seeing a side – including the inexperienced Tom Flanagan, Jordan Thompson and Gavin Whyte – given a proper test.

“It was what we wanted from the game,” O’Neill said. “Obviously we didn’t expect to be 3-0 up at half-time against a team of the Czech Republic’s quality but we knew we’d get a reaction from them.

“The first half was excellent in terms of the quality of our play, our pressing, the goals we scored.

“We knew in the second half we would come under pressure. Possibly the two goals coming so quickly, it goes from 3-0 to 3-2, made it more difficult for us, but the players defended greatly. It meant a lot to us to win that game and that showed in the attitude of the players.”

This was an old-fashioned game of two halves. Northern Ireland were on top for pretty much all of the opening 45 minutes, taking the lead through McNair’s excellent strike in the ninth minute before Evans doubled the lead when the ball dropped to him for a corner in the 23rd minute.

Five minutes before the break McNair ran through on goal to add a third and in truth it could have been more with good chances falling to Whyte and Liam Boyce.

But Czech Republic coach Jaroslav Silhavy made four substitutions at half-time and provided immediate dividends as the tide turned.

The goals came in the 67th and 68th minutes, setting up a nervy finish. There was late drama when Michael McGovern gathered Kral’s header only to be bundled over the line in a melee, but the goal was immediately ruled out.

“I think you have to give credit to the opponent,” O’Neill said of the shift in play.

“No team dominates for 90 minutes. They made the decision to take chances and put more men forward and made it difficult for us to control things and play out from the back.

“That was down to them as much as ourselves. And then it becomes a little bit of tiredness. It’s the second game in a short space of time. Psychologically you don’t want to lose a strong lead and you maybe play the ball a bit quicker.

“We’ll look at the second half, there’s things we could have done better but the most important thing was to come here and get a result and we did that.”

🎥 Hear from man of the moment Paddy McNair after his double in our win against the Czech Republic! 👏🏼💚 #HesBetterThanZidane#GAWApic.twitter.com/teRe2GjYXq— Northern Ireland (@NorthernIreland) October 14, 2019

After the match Silhavy faced a grilling over his decision to make 10 changes to the side that beat England, surrendering any momentum from that result ahead of next month’s crucial qualifier against Kosovo.

“I was disappointed a little bit because this devalues the great performance we had against England, but I wasn’t disappointed in the players’ attitude necessarily,” he said.

“They did run and fight but they just lacked a little bit of courage and movement.

“We are not sorry (for the changes). Of course we didn’t think we would be losing by three goals at half-time but it was important for us to get information because when else can we try these things out?

“In a month we play a crucial game that’s much more important.”