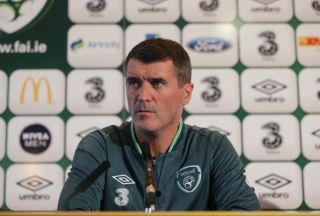 Club legend Henrik Larsson had been linked with the role, but the current Falkenbergs manager subsequently distanced himself from the job.

Keane, who had a six-month spell at Celtic at the end of his playing career, also moved to cool rumours of a return to Glasgow.

However, O'Neill - who enjoyed a five-year stint in charge of Celtic - has revealed that his partnership in charge of Ireland may last just six months after revealing initial discussions between both parties.

"I had a call the other day from (Celtic's majority shareholder) Dermot Desmond wanting to speak to Roy if it was at all possible, and I mentioned it to Roy, of course," O'Neill said.

"I am sure he was wanting to have a chat anyway because a club like Celtic might not come around too often. It was just a really informal chat, I think, but if you are asking me would I be really disappointed? Of course if Roy was to leave us.

"But I kind of felt that when I took him on in the first place, that over the course of the next 18 months to two years, that this thing was likely to happen. He was coming right back into high profile again.

"Perhaps I didn't expect it to happen so quickly. He has had a number of offers too from other football clubs as well, so he has obviously a lot to consider."

Celtic subsequently released a statement clarifying their position, which read: "Following speculation concerning the manager's position at Celtic, the club can confirm that it is currently continuing its discussions with a number of excellent candidates.

"We will continue this process and select who we regard as the best appointment for Celtic. We will update our supporters as soon as this process is complete."