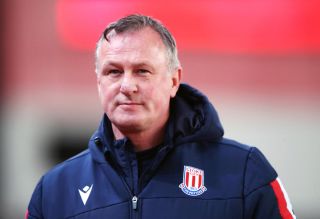 Stoke boss Michael O’Neill refused to get carried away despite his side’s battling 2-0 win over play-off chasing Cardiff.

Callum Paterson’s unfortunate 25th-minute own goal and Joe Allen’s first goal since December was just the trick as O’Neill’s charges deservedly triumphed at the bet365 Stadium.

Victory for Stoke was also their first in the league at home over Cardiff since February 2008, with O’Neill’s victorious charges pulling three points clear of the relegation zone with a much-needed triumph.

O’Neill stressed: “Ultimately, we’re in a much better position than we were in since we took over, but we didn’t expect to be five or six points clear [of the relegation zone] at this stage.

“That would have taken an amazing run of form!

“From a cosmetic point of view the league table looks better, but equally we’re well aware we’re only three points above Wigan.

“We’re dragging more and more teams into it all the time, which is also good.

“We’ve not had a game which we’ve gone into saying we can relax and enjoy the game.

“We’re coming from being bottom of the league, we were a big distance down from some of the teams.

“So we hope to get to a position on a Saturday afternoon where we can enjoy the game.

“But we’re not in that position at this moment in time.”

Stoke had lost their last two and won just one of their previous four in the league before this welcome win.

O’Neill took pride from a performance which he believed was full of “resilience”.

He added: “We’re delighted with the win and the three points.

“I thought we showed a lot of resilience in our performance, that’s probably something which has been questioned on a number of occasions this season.

“It was very good to show that against a team who were always going to test us.

“We had to deal with a lot of balls in the box and direct play, which I thought we dealt with well. And we created some good chances ourselves at times as well.

“There’s aspects where we’ll look back at in the game and admit we could have been a little bit better in.

“But the nature of the games made it difficult to get control at times. However, I felt were never under any real great threat. And we looked a threat ourselves.”

He said: “I was disappointed from the first whistle to the last.

“That’s nowhere near the levels we’ve set this season. We’ve set the standards individually and collectively.

“We played against a Stoke City team that had a right go and they’re scrapping for their lives.

“But we’ve given two poor goals away and I pride my teams on being really tough to beat.

“And if you can’t win games you’ve got to make sure you don’t lose them and today was not good enough.

“At the other end of the pitch we just missed that little bit of spark. We weren’t good enough as a group unfortunately.

“We have to make sure this result was a one-off, a blip. We have to hit our standards.

“I don’t like my teams to be out-competed at times and I want players to make good decisions.

“That today can’t be repeated for us, that’s the long and short of it.”