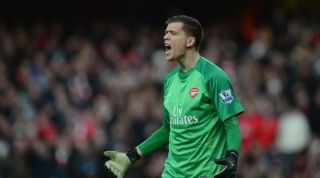 Ospina was brought in from Nice in July but his arrival has left Szczesny more convinced he is the club's first-choice keeper.

And he also said he is not friends with the 26-year-old, like he was Fabianski.

"I feel confident of being number one but I know I can't let myself play a few bad games," Szczesny told Polish newspaper Przeglad Sportowy.

"I know Ospina's ambitions don't end at sitting on the bench and clapping his hands while watching me play.

"He is a nice guy. In a sporting sense, he is a suitable player at a suitable club.

"But it's easier for me just in one aspect - I do not feel sorry for him.

"I do not think 'he's my friend' as I thought about Fabian [Fabianski]. I was convinced Lukasz deserved to play but not at my expense."