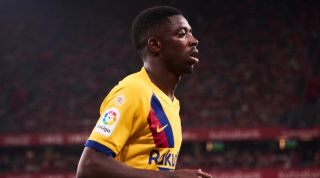 The La Liga giants are locked in talks with PSG over the return of the Brazilian star and Dembele has been mentioned as a potential makeweight to unlock the deal.

However, his representative Moussa Sissoko (no, not that one) told Telefoot that he has no doubt about where the winger will be plying his trade during the 2019/20 campaign.

“There is no chance he will leave. He wants and will win at Barça.”

The France international has been limited to just 20 La Liga starts since joining Barcelona two years ago as injury problems have slowed his progress.