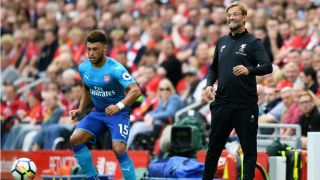 New Liverpool signing Alex Oxlade-Chamberlain made an instant impact on Jurgen Klopp when the German saw him action for the first time in 2014.

Oxlade-Chamberlain, who sealed a reported £35million move to Anfield on Thursday, played for Arsenal against Klopp's Borussia Dortmund in the Champions League three years ago.

It was the first glimpse Klopp had of the England international live and he was impressed by what he saw.

"I remember the first time I saw him play live – it was at Dortmund in 2014 and he came on as a sub that day and made a big impact," Klopp told Liverpool's official website.

"He stood out immediately because of his pace and skills and his attitude in such a big game for a young player; I remember him chasing back to make a brilliant challenge on [Henrikh] Mkhitaryan in the box to save a certain goal.

"We won that game, but lost the return match at Arsenal when he started and played well, I think he hit the post. Since then I have followed him and when I heard it may be possible to sign him I didn't need to think twice."

It remains to be seen where Oxlade-Chamberlain – who is thought to prefer a central midfield berth – will fit into Klopp's plans, but the Reds boss lauded the 24-year-old's all-round quality.

"I hear a lot of talk about positions, but let's talk about the player; he is someone with really good abilities who always gives everything for his team," added Klopp. "A player that is positive and willing to take risks to try and make positive things happen.

"He may still be young, but he has a lot of experience in the Premier League, Champions League and for his country. Already he is a very, very good player and I think he has the mentality and desire to get even better – and that excites me.

"This is someone making a tough decision to leave one great club and come to another great club and I think he had many options, so to get him means I am delighted.

"He didn't make an easy decision, but I think he made a great one to go on this journey with this squad of talented boys and our great supporters. I welcome him to the Liverpool family."