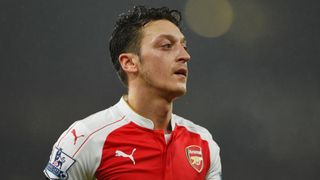 Mesut Ozil is brimming with confidence ahead of Arsenal's trip to Liverpool on Wednesday.

Arsene Wenger's men sit top of the table with 42 points from 20 games, holding a two-point lead over second-place Leicester City, while Liverpool have to settle for eighth place heading into the game.

Arsenal beat Manchester United and City earlier this season and Ozil has little doubt they can get a good result against Liverpool, too.

"When you win against big teams - and win convincingly - it gives the whole team confidence," Ozil told Arsenal Player.

"But when you look at this season, we're on a good path. The self-belief is there, we have developed ourselves and this year we can really achieve a lot. The team know that. We believe in ourselves and you sense that on the pitch.

"We know we can beat Liverpool and we also know that they will give their best against us, with Jurgen Klopp who will prepare them perfectly.

"But our aim is to play our game and get the three points - that's why we're travelling there."

Arsenal had to settle for a goalless draw with Liverpool at the Emirates earlier this season.