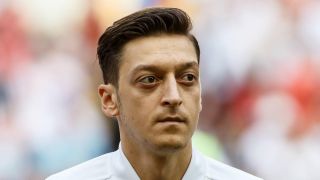 Both players have Turkish heritage and Manchester City midfielder Gundogan explained the meeting was not meant as a political statement.

But Ozil is yet to speak publicly, with the Germany national team's general manager Oliver Bierhoff suggesting the Arsenal star should have been omitted from the World Cup squad following his Erdogan meeting.

Grindel indicated the matter had not been closed by the DFB, the body asking Ozil to make a statement on the issue, having acknowledged Gundogan's apology.

"It's true that Mesut has not commented yet, which has disappointed many fans because they have questions and expect an answer, and they rightly expect that answer," Grindel told Kicker.

"So it's very clear to me that Mesut, when he returns from vacation, should also publicly give his view.

"We also want to wait and see how Mesut gets involved. It's fair we give a well-deserved international who made a mistake a chance."

With Low set to stay in charge despite Germany's group stage exit in Russia, Grindel said Ozil's international future will be in the coach's hands.

"It comes down to the athletic analysis of the national coach," the DFB president added.

"In fact, I hope that Ozil's opinion is so clear that the questions of the fans and the association are answered."

We had a very open and frank exchange at the , in which we have addressed many issues. We are all firmly convinced that Jogi Löw is still the right coach for our team . July 3, 2018

Ozil's father Mustafa, however, hit out at Bierhoff's comments and suggested the midfielder should withdraw from selection for the national team.

"This statement is insolent. In my opinion, it is aimed at saving one's own skin," he told Bild.

"He has been playing for nine years in the German team... including becoming world champions. He has contributed a lot for this country. It has always been: if we win, we win together.

"But when we lose, we lose because of Ozil? He is now getting whistled at and made a scapegoat. I can understand if he feels insulted.

"He needs to decide for himself. But if I were in his place, I'd say 'thanks a lot but that's it!' The hurt has grown too strong. And who knows what'll happen at the next match.

"In Mesut's place, I would step down. But that's just my very personal opinion."